It's that time of year again, where I revel in street photography. I try to get out in the street as much as I can during Mardi Gras to the point where every year before Fat Tuesday I feel like I’ve caught the flu from pushing myself to hard. But hey that’s what mardi gras is all about in a sense: Revelry in excess.

2019 Mardi Gras was a fun year. Fat Tuesday was a beautiful day, I met friends and family in the morning in the bywater and walked up with the krewe of St. Anne. I was dressed as a photojournalFISH. My girlfriend and I wondered around the quarter and ended the day up on the moon walk. I don't remember to much rain, or too much cold in the days leading up to Fat Tuesday. The uptown parades were lovely and I even got hired out to shoot some portraits of some ladies in NYX while they were staging. Being a New Orleans photographer is awesome. I really do love my job, specially when work and play gets combined. As far as people of mardi gras project went, it had it’s usual set backs. My favorite camera broke and I didn't realize it until 5 rolls deep. I lost allot of images due to that light leak, but hey that's the risk I run for playing with 30-year-old film cameras. In fact, most years I've had some sort of failure from trying old and different camera systems. This year it was my Kiev 60 that failed me. It's the camera my photography logo is based off of. Besides that, I had a great time. I used a Nikon f5 with an off-camera flash, a kiev60, an 8x10, and my mom’s old nikon fm2. I've been trying to simplify it so I don’t go gear crazy before parades trying to decide what to shoot on. (lol Obviously I'm not doing to good of a job on that, but hey it's mardi gras I’m gon do what I wanna.) Luckily a couple years back i decided on black and white kodak film, so that helps a little. This year I shot on tmax and trix pushed one stop.

Throughout the years I've been trying to record audio from people so I can match it with the images. From the start of it I have been plagued with trouble. At first, I started recording just plain audio with my phone. But because of my workflow, style, and developing my film a year later I completely forgot who was who. So, then I decided to start doing video of people, so I could remember their faces. It worked brilliantly but all the video was stored on my phone and then my phone broke. lol. So, then I started to do the Instagram stories, and last year was the 1st year I realized that Instagram archives all the stories, so I can go back a redownload all of them. It works beautifully with the Instagram account. @peopleofmardigras Go check it out if you have an Instagram. I use it as a sort of contact sheet and post as many images on there that I have. All the interviews are on there too. 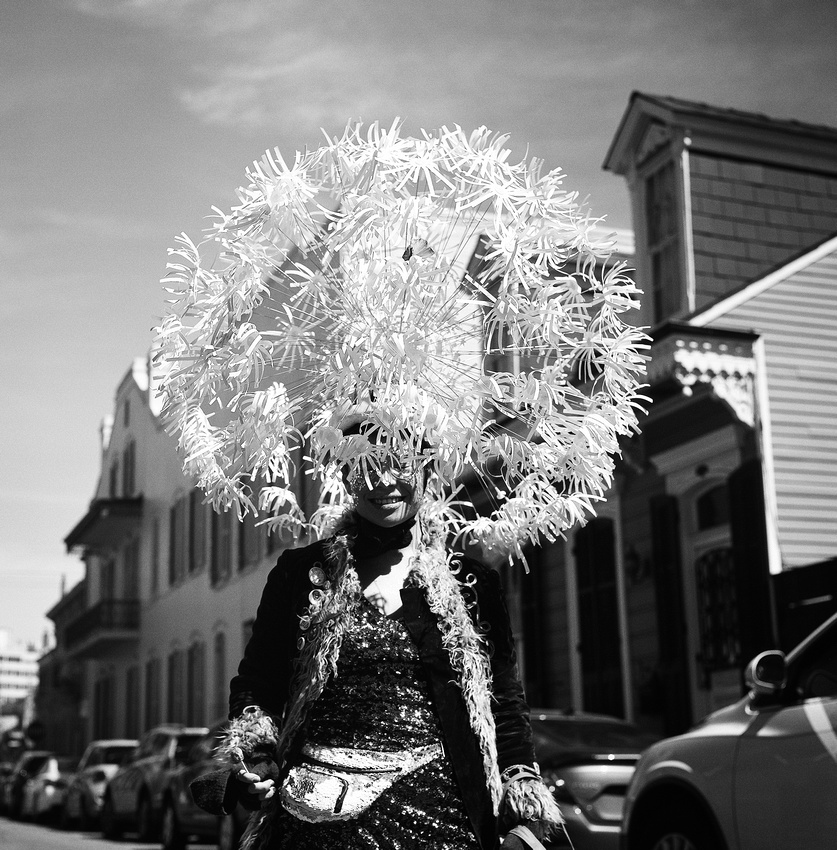 It's a photography workflow technique. I shoot mostly on film, so after mardi gras the rolls of film sit in my freezer until about a month or two before the next years carnival. Then I start developing them. I do this so I forget what I shot. There’s a certain phenomenon that happens to photographers when they are making pictures. It’s a certain type of feeling you get when you make an image. It’s hard to describe unless you yourself caught the photo-bug and have experienced the joy/obsession of it. Allot of photographers mix that feeling up with the image itself. Just because I got a good feeling taking the image, doesn't necessarily make it a good image. So, yea here’s 2019.

I started this project year or two after I caught the photo-bug. It started off as just bringing my camera to parades and shooting photos. Then I started getting into portraiture and loved the idea of a person’s face telling a story. So, I started asking strangers If I could take their portrait, with the idea if I could tell multiple individuals’ story with a portrait, that I could tell the entire collective story of mardi gras in a series of portraits. It's still that but as the years go it's become a way for me to try new photography techniques, play with new gear (or old gear last year I brought out a 50 year 8x10 camera) and to see my style of photography grow and change as I progress as a photographer.

Thanks for coming to my website and looking at my images. If you see me out and about this year feel free to ask me to take your photo!