Yall know I love Mardi Gras. Every year I spend the entire carnival season documenting Mardi Gras through my People of Mardi Gras series. Despite parades being canceled, this year was not too different for me. Instead of photographing people at parades I went to house floats and got photos of their creators. As I was scrolling through Instagram I came across a dog house replica of one of the house floats I took photos of and after a few comments and direct messages I had a photo session setup to meet the creator of this dog house float. 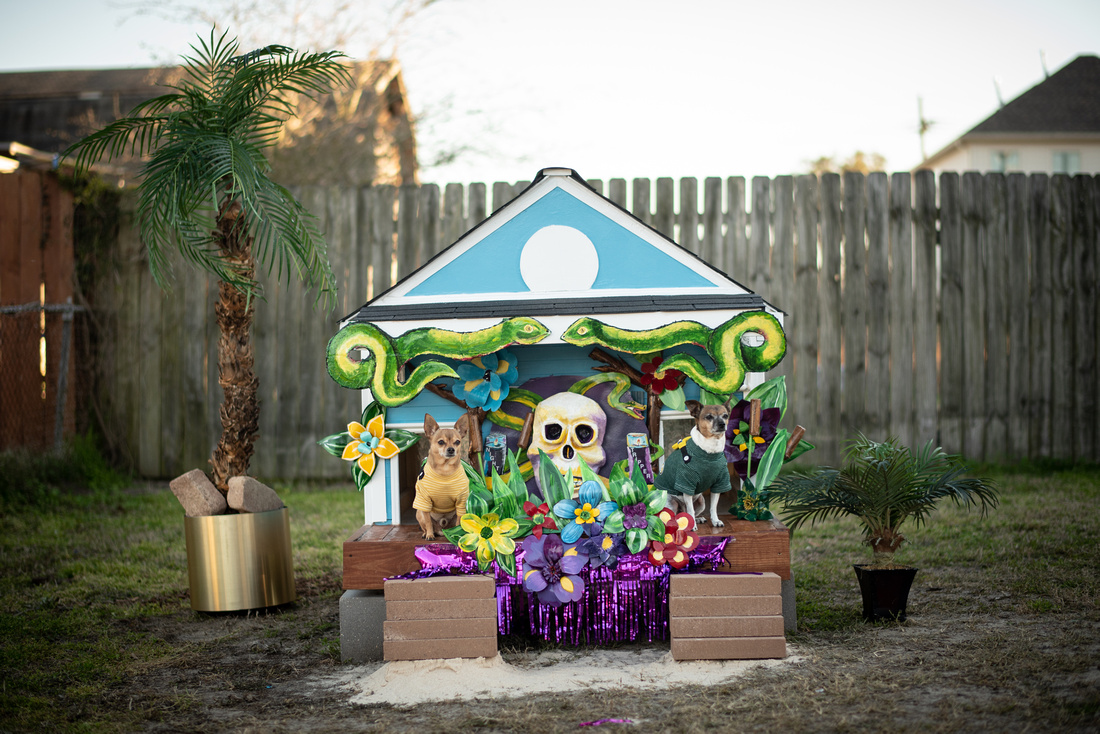 @nola_snowball and her krewe typically parade with their pups Allie and Frankie in Mardi Paws and make really cool dog floats for their pups Allie and Frankie. This year they saw the dog house float initiative put on by Mardi Paws and wanted to get in on the house float fun. After talking to @nola_snowball I learned that after Mardi Gras they decided to put the dog house up for auction.  All proceeds go to Scott's wish a 501c3 all volunteer ran nonprofit. The auction is up done on the 28th. So go bid now! PLEASE VISIT:  https://www.doghousefloats.com/auctions 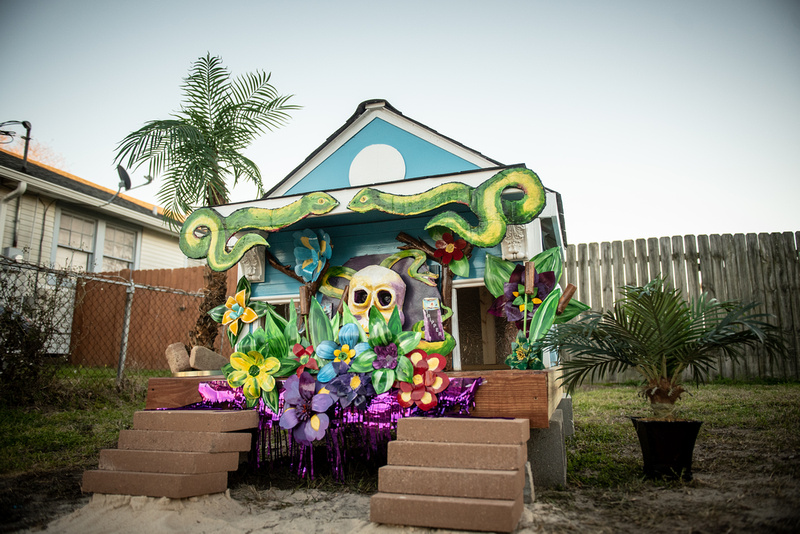 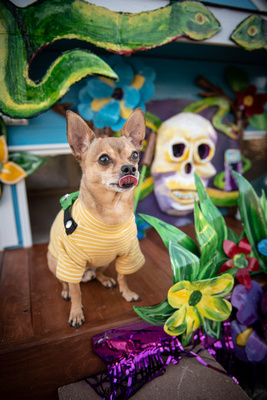 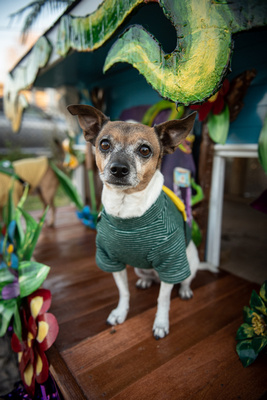 Mardi Paws Amabasadogs: Allie and Frankie and their human, who created the dog house floats, see more of them @nola_snowball 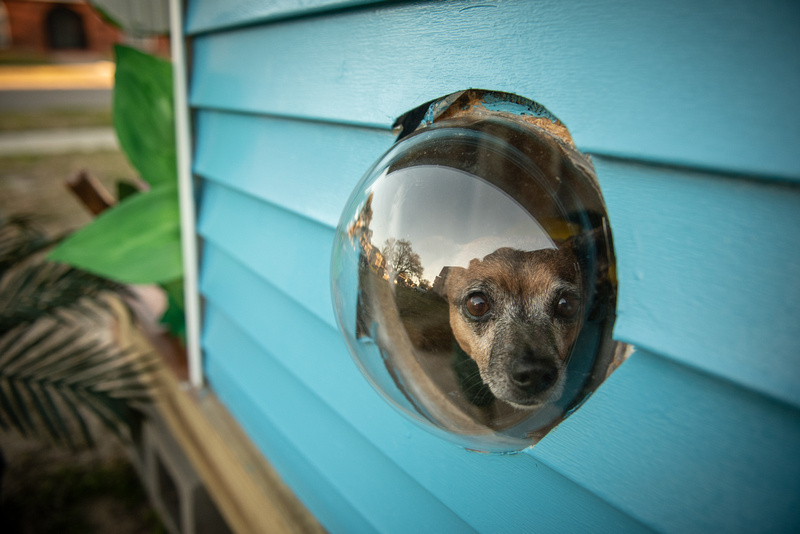 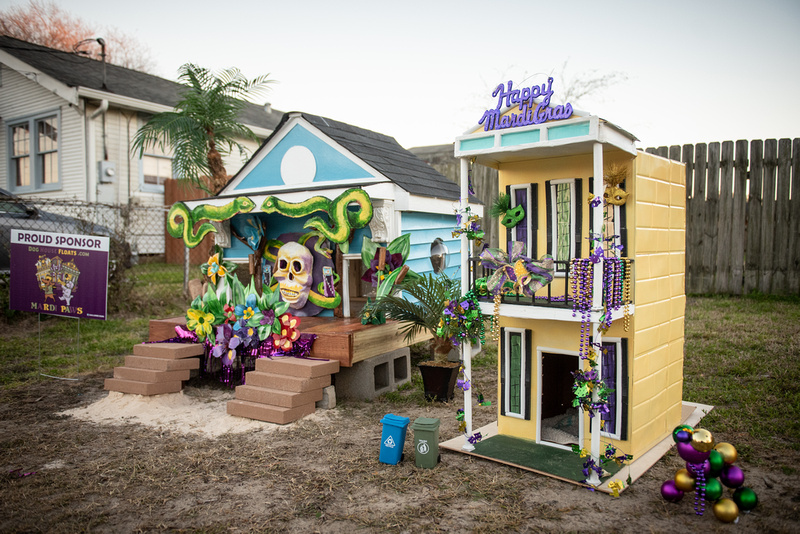 “About our Dog House Floats initiative:

In a year when the COVID-19 pandemic threatens to take a bite out of all the usual fun of Mardi Gras, the Mystic Krewe of Mardi Paws, a beloved dog parade that has been taking place in St. Tammany Parish for 27 years, refuses to take the news of parade cancellations lying down. In response to those who are begging for a safe way to celebrate this unusual Carnival season, Mardi Paws is hosting its first-ever Dog House Float contest.

Inspired by the pup-ularity of the “House Floats” that are all the rage in New Orleans and the surrounding areas, where businesses and homeowners have hired professional float decorators to transform buildings into Mardi Gras masterpieces, Mardi Paws is encouraging pooches and their people to unleash their creativity and transform dog houses into works of art. Modern-day revelers can then drive around – or go for a walk -- to see this new breed of “float” in safe and socially distant ways.

The goal of  “Dog House Floats” is to spread good cheer while drawing attention to the plight of the homeless pups at the St. Tammany Parish Department of Animal Services in Lacombe, the only open-admission animal shelter in the parish.

With Mutty Gras season having come to an end, we are so grateful for some last minute ideas from krewe members that will allow us to raise funds for our initiative transporting at-risk  dogs out of high intake shelters to the northeast to save their lives.

Our first Dog House Float was a group effort spearheaded by AmbassaDOGS Frankie & Allie and their float building krewe! They found their decorated digs featured in PEOPLE, The Wall Street Journal, Southern Living, USA TODAY10Best, you name it, and each pup felt they should take credit-lol.

As tension ensued, it resulted in a decision for the siblings to get their own spaces. Thus the creation of the "Night Tripper" Dog House Float. But living next door to each other wasn't as great as they first thought, and now having overcome their differences, they have generously agreed to donate the "Night Tripper" House to our non-profit!

“The Night Tripper” was the first house float launching the Krewe of Red Beans’ “Hire a Mardi Gras Artist” program which boasted a huge papier-mâché skull adorning the front of the shotgun house, along with snakes, irises and cypress trees by artists Caroline Thomas.